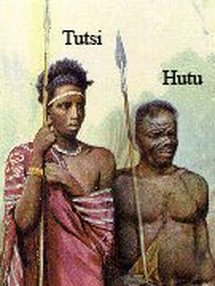 It is believed that the Hutu tribe came to Rwanda from Chad and that the Tutsi tribe came from Ethiopia soon after (Johnson). Despite their different origins, the Hutu and Tutsi tribes lived peacefully together as Rwandans. The distinguishing factor between the two tribes was the fact that the Tutsi owned cattle and the Hutu were farmers (Rosenberg). Cattle was sometimes used as currency before money had been developed, and because of this, the Tutsi were thought to be wealthier and hold a higher class than the Hutu (Johnson). The Hutu and Tutsi people did not think of themselves as two different ethnicities, but as being distinguished by their occupations of cattle owners or farmers. It was even easy for them to 'switch' tribes, either through marriage or by acquiring cattle. All of this changed when the Europeans colonized this region. The Germans were the first to colonize Rwanda in 1894, but then had to forfeit all of their colonies after they lost World War 1 (Rosenberg). Belgium had been occupying Rwanda towards the end of World War 1, so they took control of the area. The Belgians were the ones who created the large ethnic rift between the Hutu majority and the Tutsi minority. When the Belgians first took control of the Rwandan region, they implemented passbooks that identified the people as either Hutu or Tutsi.  The Belgians favored the Tutsi over the Hutu because they had 'European-like features'. This favoritism carried over into the government as well. The Tutsi were given any and all leadership positions in the government. The Hutus were angered by this, and being that they were the majority, they were given control of the government when the Belgians feared that a struggle for independence could soon happen if the Hutus were not appeased (Rosenberg). Thus, the Tutsis were displaced from their positions of power. This created two ethnic groups that have been divided for generations because of the inequality of power invested in them by the Belgians.

All of these events created mounting hatred of the Tutsis by the Hutus. When the strategic murder of the Rwandan president happened on April 6, 1994, the planned and highly organized killing of the Tutsis began.
Powered by